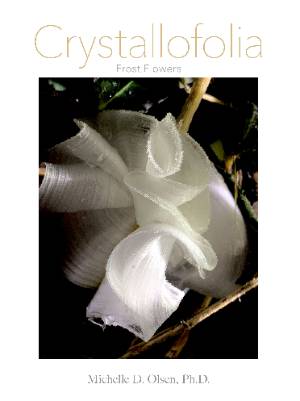 When Dr. Michelle Olsen stumbled upon frost flowers for the first time, she thought they were trash. Peering closer, she discovered a unique Ozarks phenomenon—sculptures of ice that extrude from the stems of the Verbesina virginica plant. Now in this photographic collection, Olsen takes readers up close, giving them the chance to see what she saw and learn what she's learned along the way.

Michelle D. Olsen, Ph.D., is the Director of Institutional Research at Missouri State University. A native of Montana, she resides in Springfield now, but has lived and worked in many places, including at Apple Computer, Inc. in California. Her doctorate is in Teaching and Learning in Higher Education, and she spent several years in the classroom and writing curriculum. Her passion for the field comes through in this nature volume, Crystallofolia: Frost Flowers.

This Life: An Autobiography 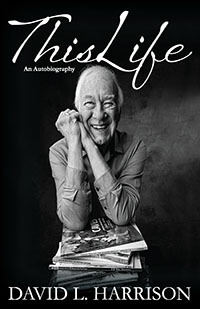 David L. Harrison is a native of Springfield, Missouri who has written over 100 children’s books in poetry and prose. Now, in his new autobiography, the author takes us back in time to his childhood and traces the evolution of a scientist turned writer. From Missouri to Arizona to Kansas, all the way across the globe to Malaysia, and spanning from the World War II era through 9/11 and on to the present, This Life chronicles the fits and starts, professional rejections and redirections, the inevitable personal life conflicts and tragedies, as well as the breakthroughs and triumphs in a career that has spanned seven decades…and is still going. Perfect for aspiring authors and fans of Harrison’s work as well as anyone who enjoys a tale of hard work, perseverance, and the joy of following your dreams. 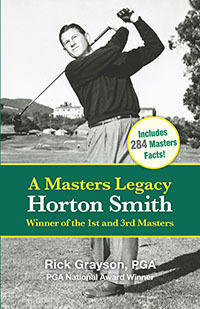 In 1962, the city of Springfield opened the Horton Smith Golf Course on the west side of town. Its namesake returned to his hometown to cut the ribbon on that day in March, shortly before he passed away. Smith's life was marked by athletic excellence, professional triumph, and diplomacy during turbulent years in American (and sporting) history. In Horton Smith: A Masters Legacy, author Rick Grayson tells modern readers how the two-time Masters Tournament champion and PGA President navigated the racial divisions that were reaching a national boiling point and the resulting tensions that were creeping onto the greens. In a time where Smith’s character is being called into question, Grayson invites you to take another look. Decide for yourself.

Rick Grayson is the Teaching Professional at the Rivercut Golf Course in Springfield, Missouri. He has been a member of the PGA of America for 37 years and has taught over 10 high school state champions as well as players on the Korn Ferry Tour. He achieved the PGA’s highest honor in 2011 by winning the PGA Junior Golf Leader award, the first person from Springfield to win a national award since Horton Smith. He is a member of the Missouri Sports Hall of Fame, PGA Midwest Section Hall of Fame, and the Ozarks Golf Hall of Fame. In 2021, he received Golf Magazine’s Lifetime Achievement Award. This is his third book.

Jews of Missouri: An Ornament to Israel 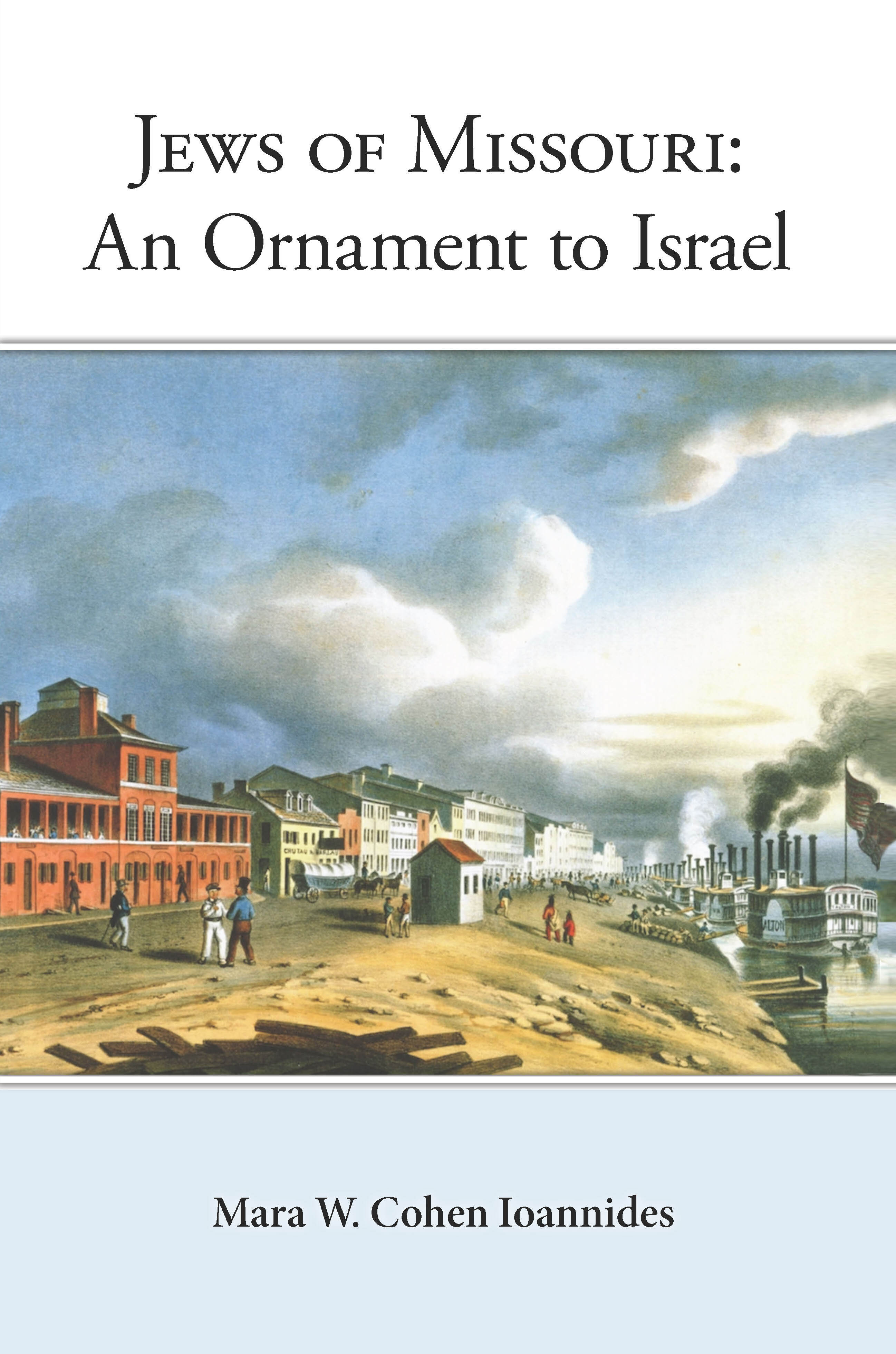 “Jews of Missouri” was written to reincorporate minorities into the history of the state. The book, which focuses on pre-World War I, is divided into four parts. The first looks at the creation of the state of Missouri. The second examines the history of Jews in the United States and the state in broad terms, along with examining issues of concern to the American Jewish community, like intermarriage, slavery and military service. The third part presents the story of four Jewish families who spread across the state. Finally, the appendix lists every town in Missouri that had a Jewish presence before the first World War.

Mara W. Cohen Ioannides has studied the Jews of the Ozarks for more than two decades with degrees from Columbia University, Carnegie Mellon University and The Spertus Institute of Jewish Learning and Leadership. Mara is a faculty member of the English Department at Missouri State University, and she is president of the Midwest Jewish Studies Association and the Ozarks Studies Association. She is also the editor of the “Greene County Historical Society Online Encyclopedia”. 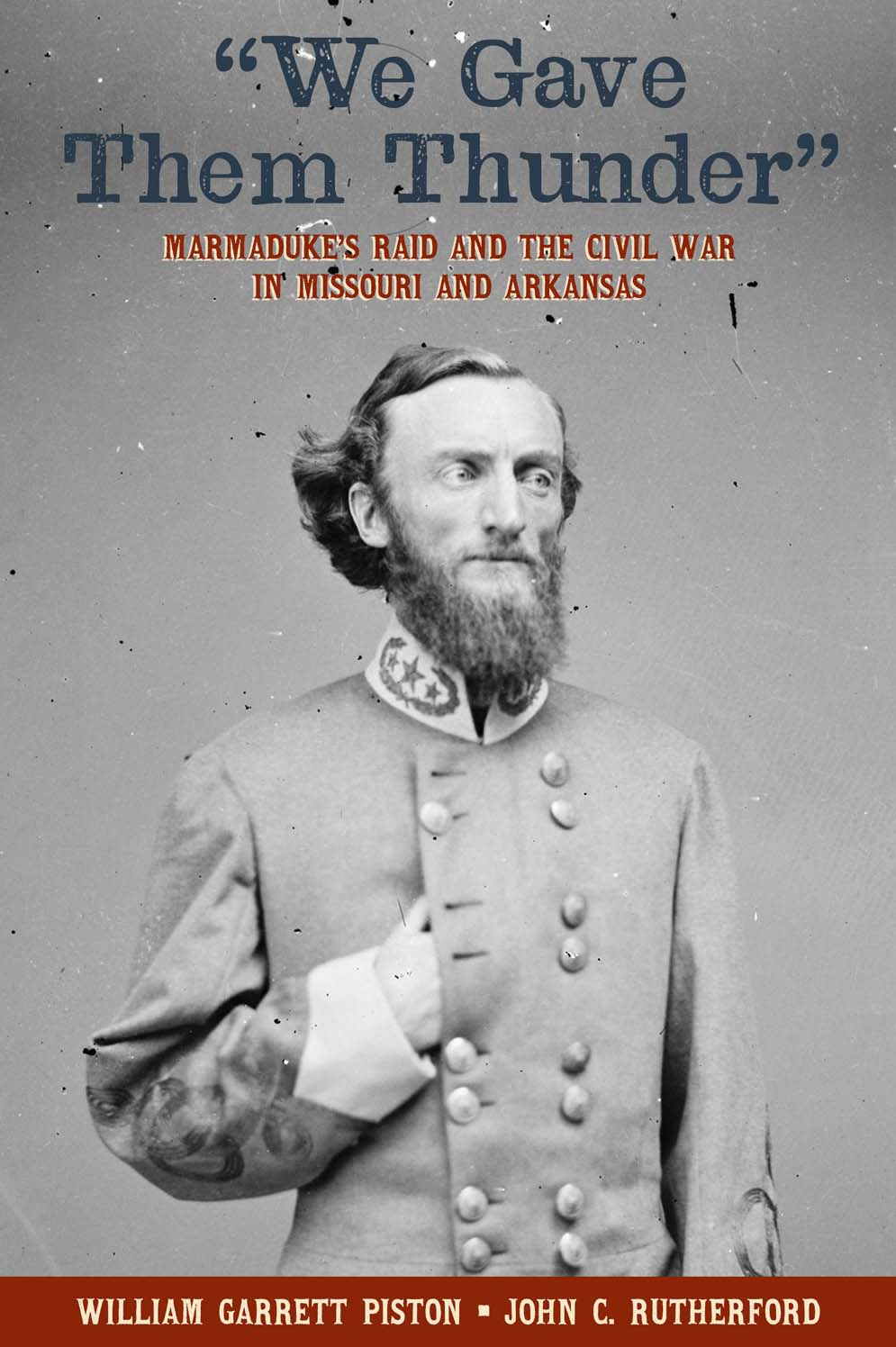 Written by William Garrett Piston, professor emeritus of history at Missouri State and John C. Rutherford, local history associate at Springfield-Greene County Library, “We Gave Them Thunder” is an authoritative study of Marmaduke’s raid into Southwest Missouri, the Battle of Springfield (January 8, 1863), and the Battle of Hartville (January 11, 1863).

Piston and Rutherford have produced an impressive account of an important Civil War military action in the Ozarks. If Gen. John S. Marmaduke’s forces had captured Springfield, the ramifications would have influenced Union and Confederate operations far beyond the loss of the largest and most important U.S. supply base in the region. It would have affected Union morale and operations throughout southwest Missouri, into Northwest Arkansas, up through Rolla, and to St. Louis. For the Confederates, beyond providing them a wealth of rations, forage, horses, weapons, and other military items, it would have reinforced their stature in Missouri, Arkansas and the Indian Territory (Oklahoma).

Combining extensive research with astute analysis, Piston and Rutherford’s excellent study rescues General John S. Marmaduke’s “First Missouri Raid” from obscurity. Their even-handed narrative pays tribute to both the long-suffering Confederate raiders and to their tenacious Union opponents. This work should prompt students of the Civil War to turn their attention to the Trans-Mississippi West, where they will discover stories as compelling as the celebrated raids of Confederate commanders John Hunt Morgan and Jeb Stuart.

Purchase a "We gave them Thunder" 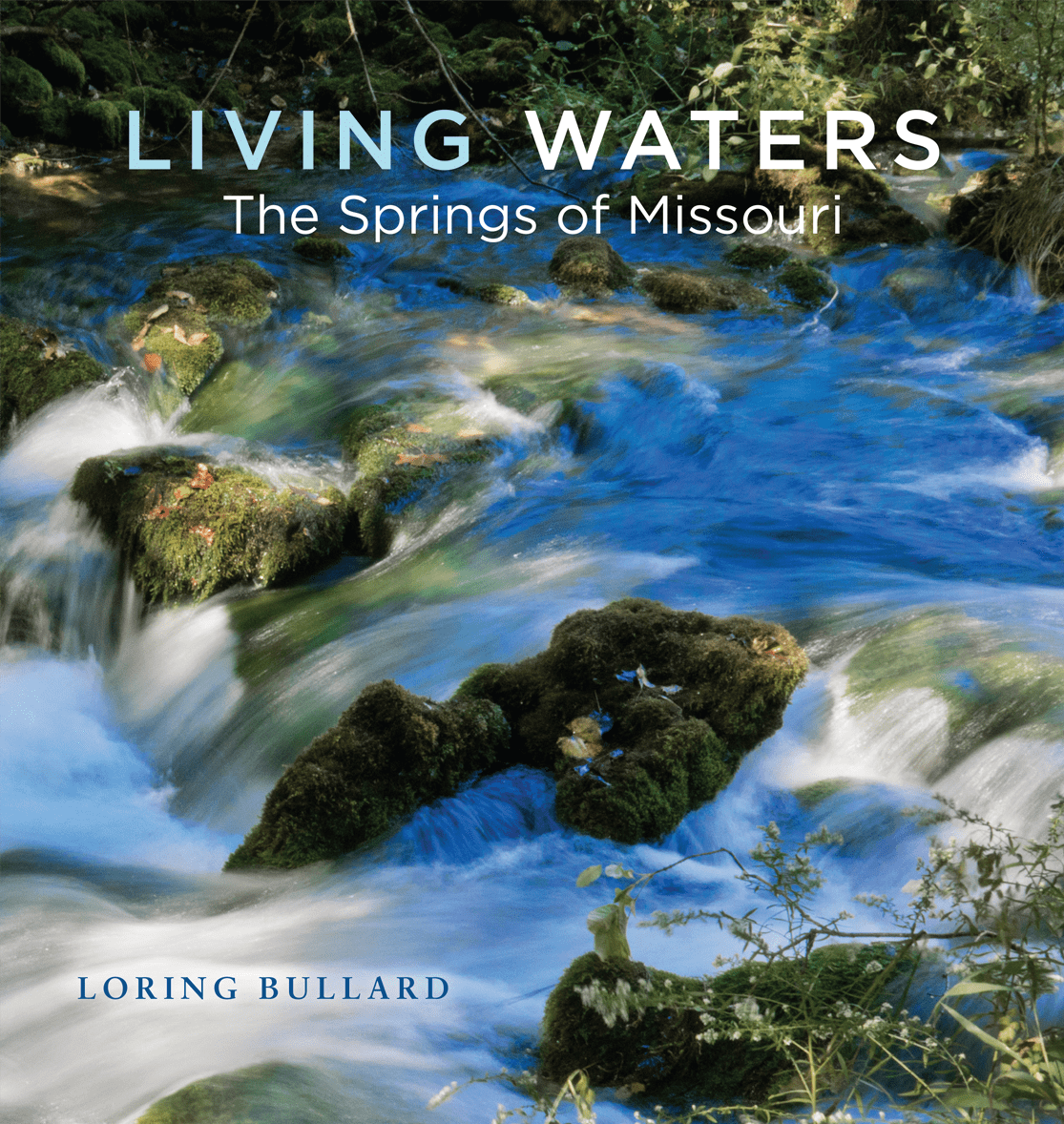 In Living Waters: The Springs of Missouri, Loring Bullard explores the rich variety of Missouri springs, placing them in the state’s patterns of settlement and development. From the founding of towns to the establishment of wagon-road rest stops to largely forgotten spas and resorts, Missouri springs were, and continue to be, centerpieces of the landscape.

They were once cherished sources of drinking water, their purity unquestioned. They provided power for mills, stock water for manufacturing plants, and source waters for fish hatcheries. Their numbingly cold waters filled swimming pools and trout ponds at scores of camps and resorts, where Missourians escaped the summer heat.

From the earliest times, springs were also sources of fascination. “Where does all that water come from? Why is it so cold?” Bullard gives us the science of spring hydrogeology; at the same time, he reminds us that springs were once revered symbols of renewal, purification, and everlasting life. They are no longer as central to the lives of Missourians. But are they still important to us? The answer to that question (and others) can be found in Living Waters. 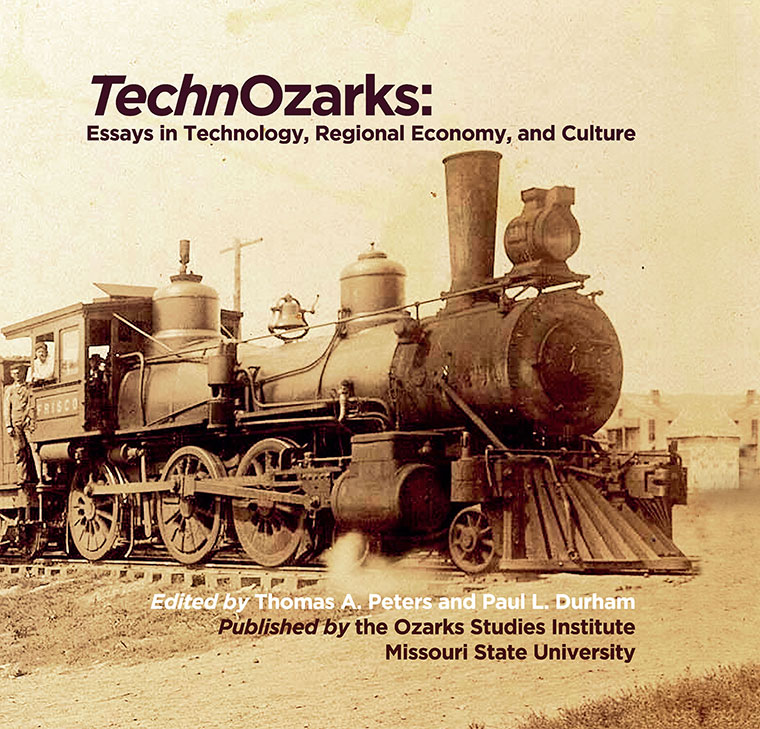 Edited by MSU Dean of Libraries, Thomas A. Peters, and Distinguished Professor of Biology, Paul L. Durham, TechnOzarks is the latest publication of the Ozarks Studies Institute, an initiative of the Missouri State University Libraries. Lavishly illustrated in hardcover, the book supports the 2019 MSU Public Affairs Conference, theme, “The 21st Century Digital World.”

As the book’s publisher, the Ozarks Studies Institute (OSI) seeks to preserve the heritage of the Ozarks, its culture, environment, and history. The Institute promotes a sense of place for residents and visitors alike and serves as an educational resource by collecting existing—and discovering new—knowledge about the Ozarks and by providing access to that knowledge. Its essays and photo albums divide into three sections.

The first section, “Regional History through the Mid-Twentieth Century,” recounts the conquest of the rugged Ozarks terrain (by railroad, automobile, and hydroelectricity) and the development of “big machine” industry. The second section, “From the Later Twentieth Century to the Present,” explores communication technologies in radio and television (which made Springfield, for a time, the epicenter of country music broadcasting in America); other themes include urban Springfield’s transition from an industrial to a service economy and the transformation of the “lake country” landscape through tourism. The third section, “The Twenty-First Century and Beyond,” celebrates the region’s successful wedding of technology and entrepreneurship, ensuring the Ozarks a place in the emerging global economy; also featured is “A Forum on the Future,” in which scientists, academicians, healthcare practitioners, men and women of business, and citizens of diverse backgrounds make their predictions—and say what they are doing, now, to ensure a hopeful future for Springfield and the Ozarks.

Living Ozarks: The Ecology of a Natural Place 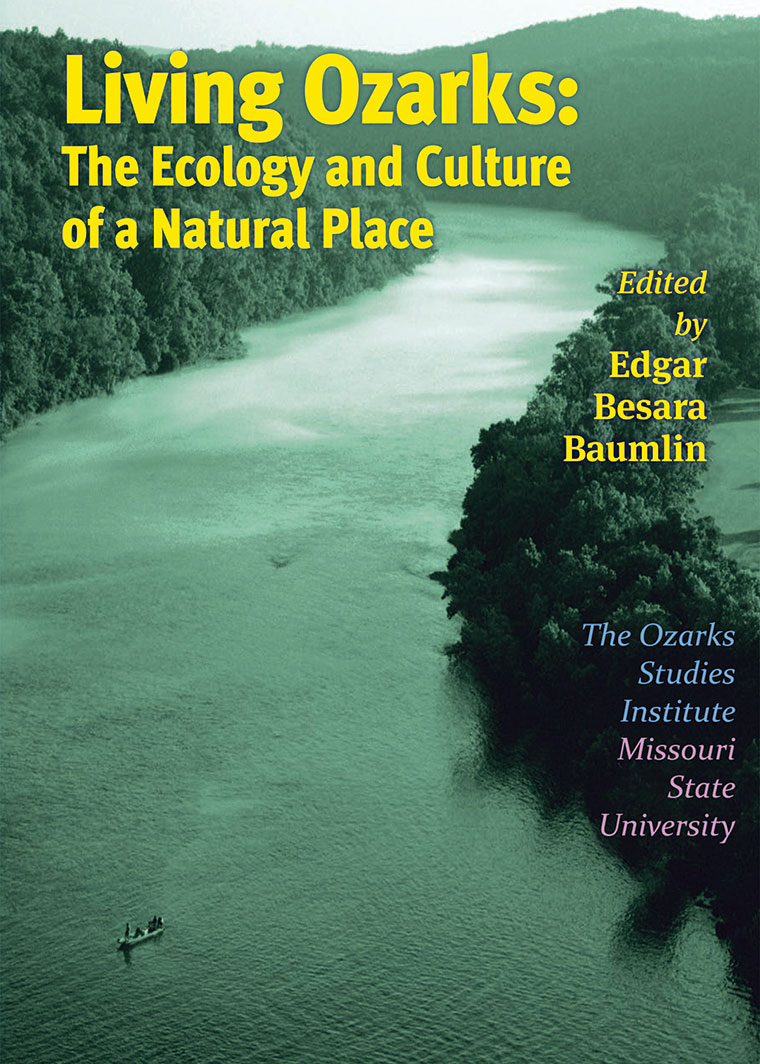 Lavishly illustrated, Living Ozarks: The Ecology and Culture of a Natural Place brings together essays, journal articles, book excerpts, and art/photo albums, all themed around the region's heritage of nature and culture intertwined. Featured among the artwork are botanical drawings of S. Fred Prince, arguably the Ozarks' first scientific illustrator; the “outsider art” of S.W. Mannon, one of the last “Shepherd of the Hills” pioneers (whose cabin is now an attraction at Silver Dollar City theme park); and internationally renowned photographer Jacek Fraczak. Readers familiar with the Ozarks' tradition of nature writing will recognize many of the names anthologized, including Leonard Hall, Milton Rafferty, Robert Flanders, Werner O. Nagel, Robert K. Gilmore, and Dan Saults. Section topics include Defining the Ozarks, Eras of the Ozarks, Sustainability in the Ozarks, The Ozarks as Wilderness, and Experiencing the Ozarks.
As our national dialogue turns with increasing urgency toward issues of ecology and sustainable practices in business, land and water use, and lifestyle, an anthology like Living Ozarks offers important historical-cultural contexts. As Missouri State University President Cliff Smart writes in his foreword, “The historical texts and images show where we have come from; the contemporary texts and images give suggestions as to where we've arrived and how we might move forward—our collective task being to ensure that the Ozarks remains a place of health, beauty, richness, and wonder for future generations.”